It’s been quite a whirlwind of weather, outings and new climbing partners since getting back into the full swing of things. East Partner in the the Gores, New Mexico’s high point, Silverheels, Hagar, “The Citadel”, and a Crystal outing never to be spoken of again, just to name a few, and all within the past month or so. With another cataclysmic weekend weather forecast, and a “ski” trip to the Elks and/or the Gores not exactly safe or logistically possible without a long wait at the car for that guy on his snowshoes, Zambo and I decided it was best to stay close to home and hit the Park. Thoughts of Taylor Peak from Bear Lake danced in our heads. Along the way we could take in the views from Flattop, Hallett and Otis.  It had the makings to be a great morning if we could just get that small weather window that had been forecast for Saturday AM. After much thought, we left for the Park and decided we’d get up to the Divide and play the rest by ear based on conditions. At the very least it would be time well spent getting to know the Zambino and there is technically no such thing as a bad day in Rocky Mountain National Park.

We left the parking lot at about 6:30 AM. We carried the snowshoes on our packs. Fortunately, that is where they would stay all day. The winds were swirling up high as is usually the case near Flattop and the Divide. My first trip to the summit of Hallett in November of ’12 consisted of 40-50 mph winds and what felt like razor burn from being pelted with snow to the face. I was prepared for the worst, as was Zambo. This would be David’s first trip up Hallett, or so we think. The jury is still out. He has definitely visited Flattop Mountain with his wife Katie once previously and may or may not have continued on.

After touching a few of the tallest rocks that we could find within the vicinity of unranked “Flattop Mountain”, we headed for Tyndall Glacier which lies on the saddle between Flattop Mountain and Hallett Peak. It is here we reevaluated our situation. Even though we couldn’t see Hallett (or anything more than 20 ft in front of us) we knew it was less than a mile and only a few hundred feet vert. There would be no views from the summit, but we were both warm and it was still relatively early so we pushed on. 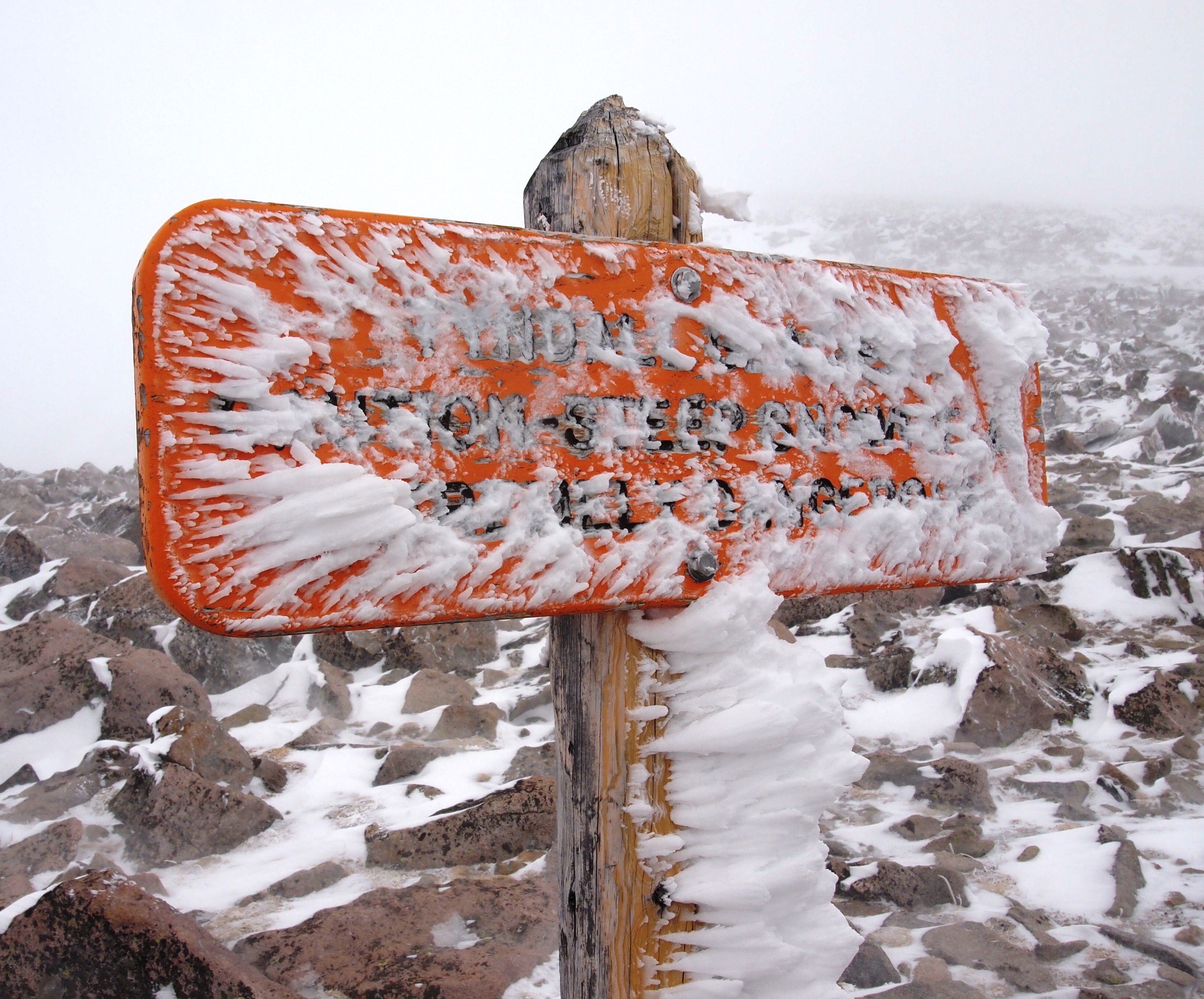 We rounded the corner to the east, scrambled up a few hundred feet or so, and 20 minutes later found ourselves on the summit of Hallett. Let’s call this Zambo’s 2nd 1st ascent of the peak. He still has no idea and I still have no idea what a view from the summit really looks like. We hunkered down and rallied for a few minutes, ate some food, made fun of our mutual friends, joked about how incredible the views from this vantage point might really be, and then began the trek back to Bear Lake.

With conditions deteriorating, we stayed close by and had some good talks. At one point I said something like “Is this Heaven?”. It was eerily white everywhere.

As we approached treeline, and eventually Bear Lake, the surrounding peaks below 13k faintly came back into view. The lull in the storm was a nice reprieve from the blizzard-like conditions we had just been subjected to. Back at the lake it was evident that Bear Lake might be the Capital of the Gaper Kingdom. Zambo tells me that I may even have had my first broville sighting. Despite the conditions and the lack of views, it was quite an adventure and another solid day in the Park with good company. Thanks for being a good sport, Zambo.

Ed’s Cantina once again served up an excellent burrito, bison burger and brews. More importantly, it’s nice to see Estes Park looking more and more like the Estes Park of old on each trip up there.