On Friday night Shulman sent me a texter that said “KC and Challenger?”, to which I responded, “Grays and Torreys, it’s closer?”. Nine hours later he was shivering on my doorstep and we were moseying on over to Loveland Pass. At about 6:30 AM we exited the warm comforts of the jeep and headed for Point 12,915. This point is about a mile and 1,000 feet vertical from the pass and the remainder of the trek is along the Continental Divide.

END_OF_DOCUMENT_TOKEN_TO_BE_REPLACED

Note: Originally posted on 14ers.com. Most timestamps have been removed.

I ran the Leadville Trail Marathon on Saturday, June 30th. It hurt. A lot. In fact, now that I’ve had a few days to think about it, I’d say it was easily the most painful thing I’ve done in my life. That race and it’s quad-crushing hills left me battered heading into an abbreviated July 4th work week.

END_OF_DOCUMENT_TOKEN_TO_BE_REPLACED

About 6 months ago Dana called me up from the other side of the continent with this idea of a trip to Half Dome in the works. He wanted to know if I would be interested in coming along and I said, “For sure”. A month later, plans had changed and the crew was now considering the Wind River Range in Wyoming. Another great spot and I again said, “Count me in”. A few weeks later plans were changing again and I said, “Dana, I live in Colorado! Come here dude and I’ll be your tour guide”. And so the story goes. The following is how it unfolded.

Thursday, June 21, 2012 – Kevin, Miguel, Nate and Ray flew in from Massachusetts and Dana from DC. Dana arrived a few hours early, the rest of the gang around noon. We hit up REI for some last minute supplies and the bear canisters and we were off. The Destination: Wild Basin Trailhead (8,500′) – Rocky Mountain National Park.

After we dropped our packs at camp we headed for Bluebird Lake, arriving just before dark. The lake is 3.3 miles from the North St. Vrain campsite. We took a breather, enjoyed the lake, ate some trail mix (and some ibuprofen), and then headed back to camp using our headlamps and called it a night.

We woke up a little after 7 and hit the trail around 8. Bivvies make for a pretty quick setup/take down. Destination #1 on the day: Lion Lake #1, 2.2 miles from camp.

Below is a shot of the saddle between Mount Alice and Chiefs Head Peak. The defined trail ends at Lion Lake #1. There are some cairns which will get you to Lion Lake #2, but from there you’re on your own. We headed right, towards the eastern edge of Snowbank Lake and around to the middle of the saddle.

We began working our way across the Divide after descending Chiefs Head. Mount Alice was next on the day at an elevation of 13,310′ (approx. 1.5 miles from summit of Chiefs Head).

After Thunder Lake we headed back to camp, grabbed our overnight gear and then trekked back to the Wild Basin TH to our cars (6.8 miles from Thunder Lake to the cars). We then drove back to Denver. It was a long and ambitious trek and we were beat.

Saturday, June 23, 2012 – We hit up a great breakfast joint on Tennyson in the Highlands, ate way too many pancakes, drove out to Red Rocks, grabbed some gear at REI, ate way too many tacos at Wahoos, and once again we were off to the Park. This time headed for the Longs Peak Trailhead.

We unpacked the bivvies and were fast asleep before dark.

Sunday, June 24, 2012 – Longs Peak – Keyhole route – 2 AM start. The mountain was all ours. I’ll let the pictures tell the story from here. It was one hell of a weekend to say the least. Great having you guys in Colorado and I’ll see you next year in the White Mountains. Come back soon! 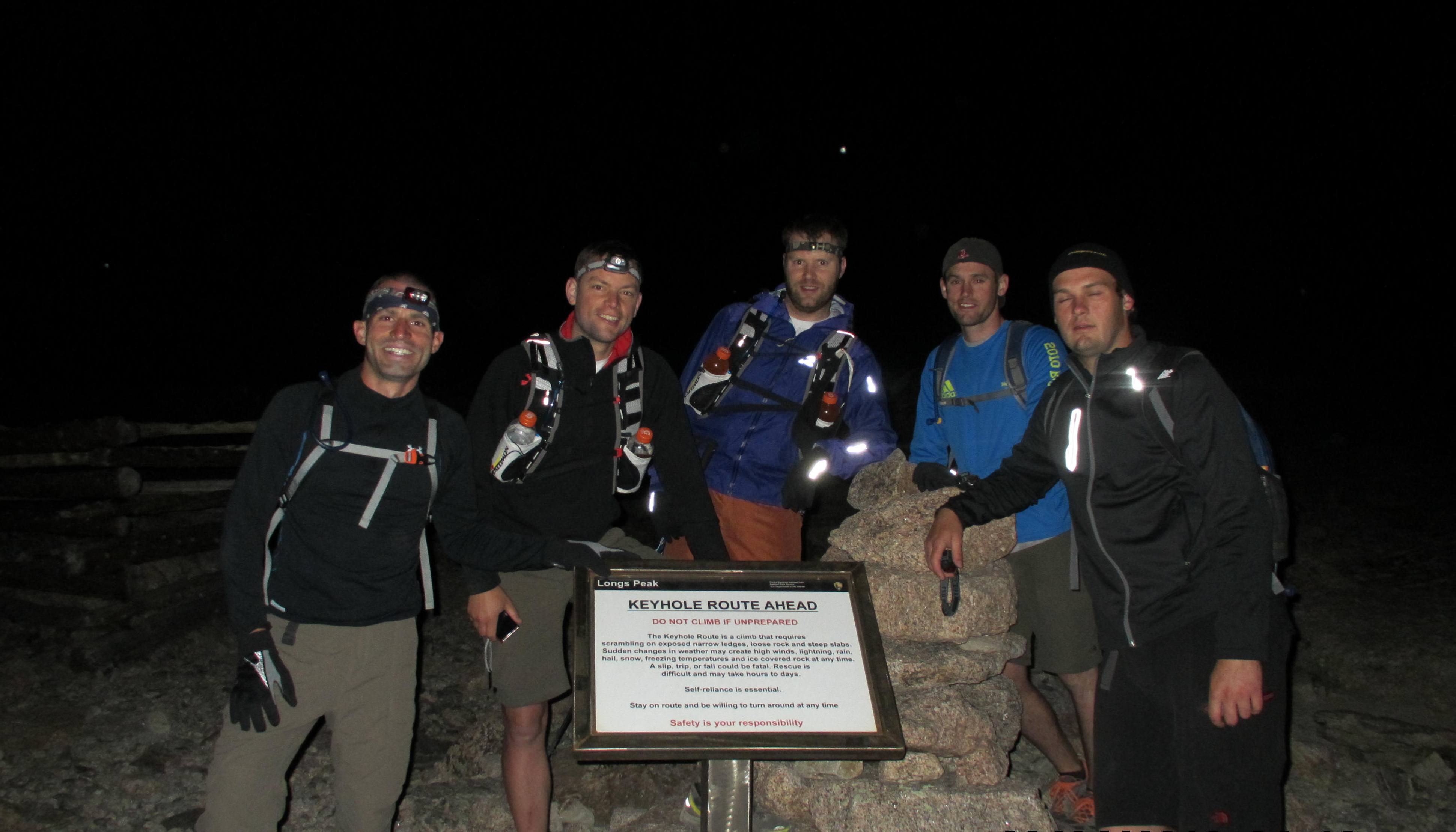 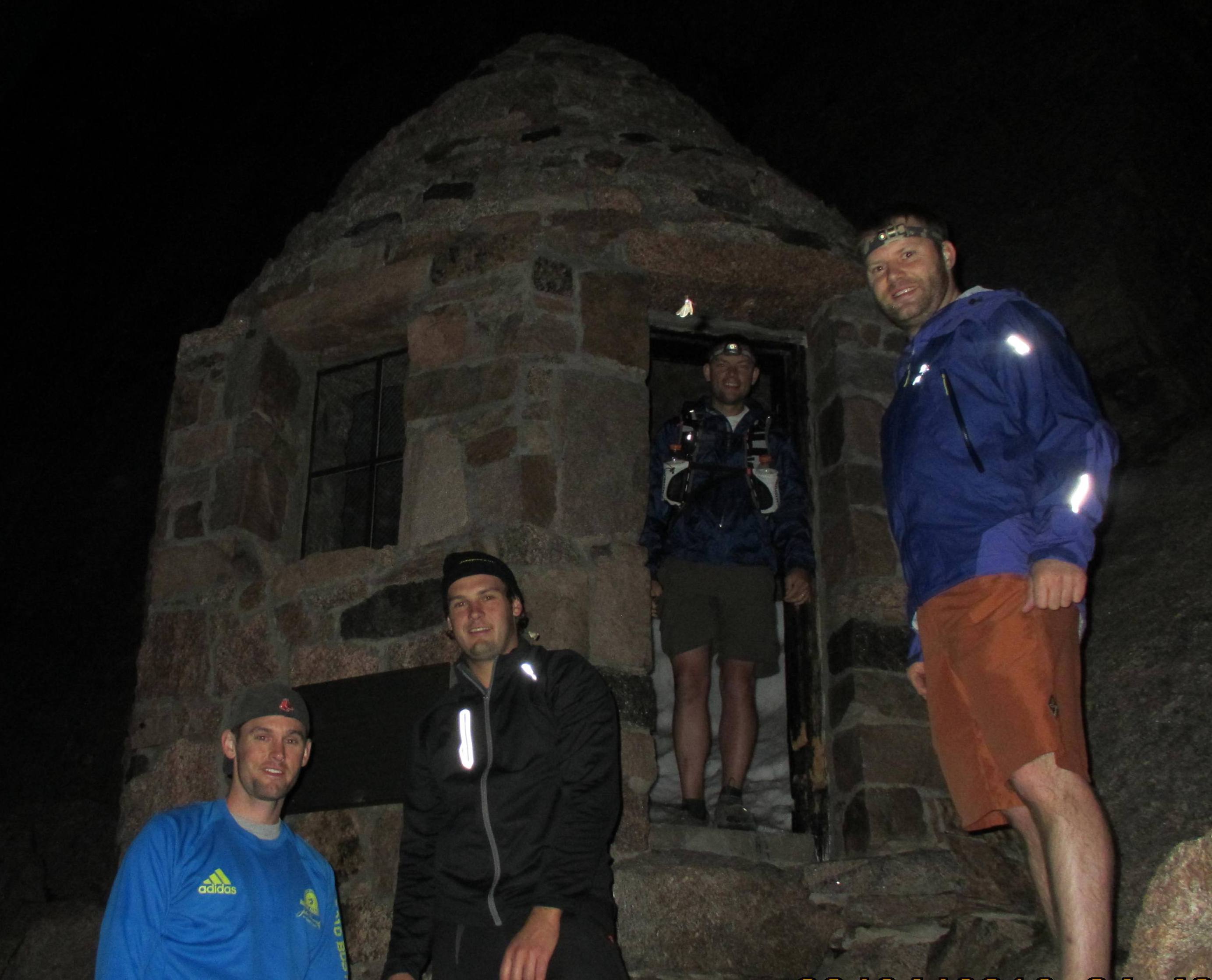 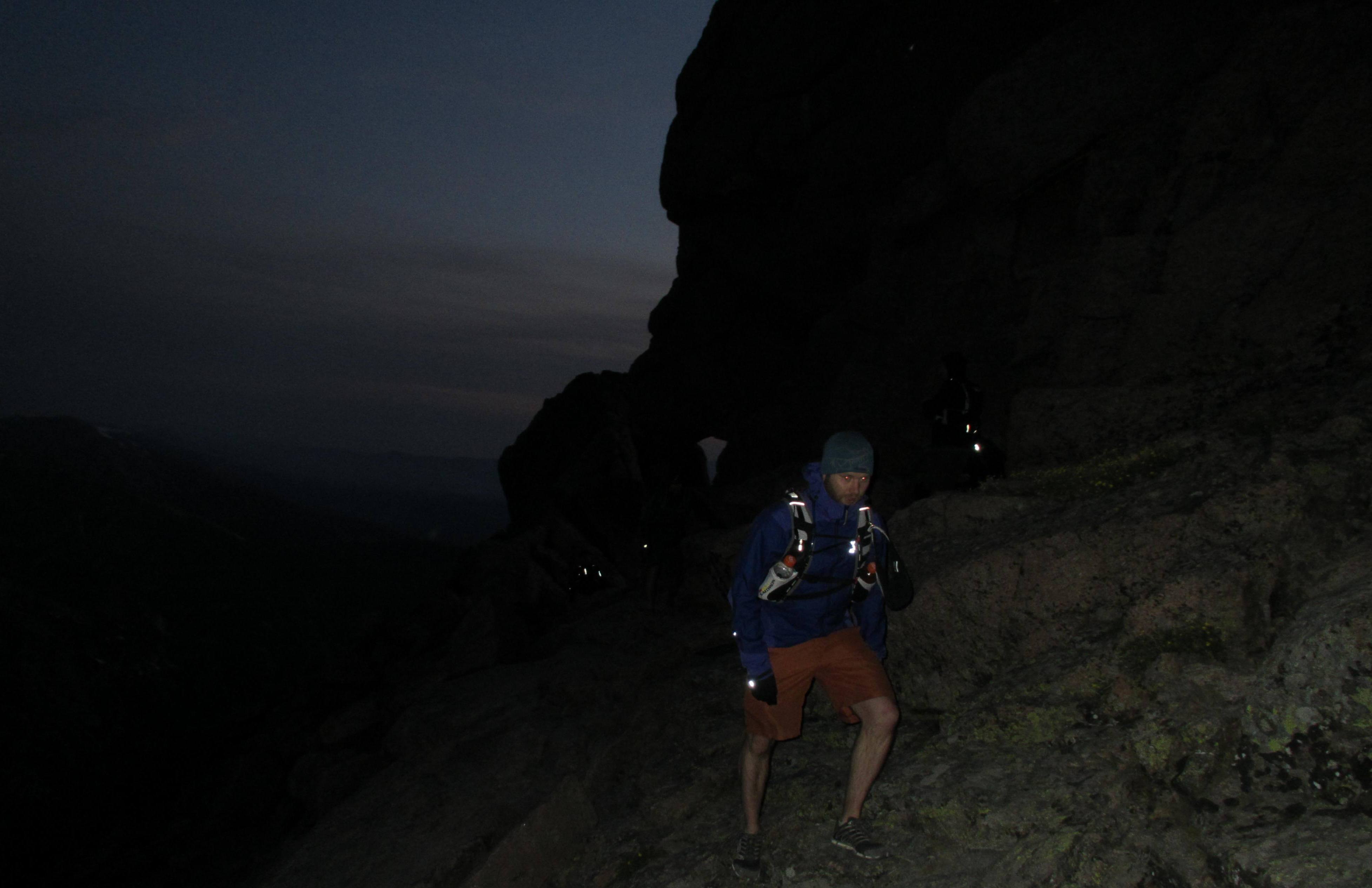 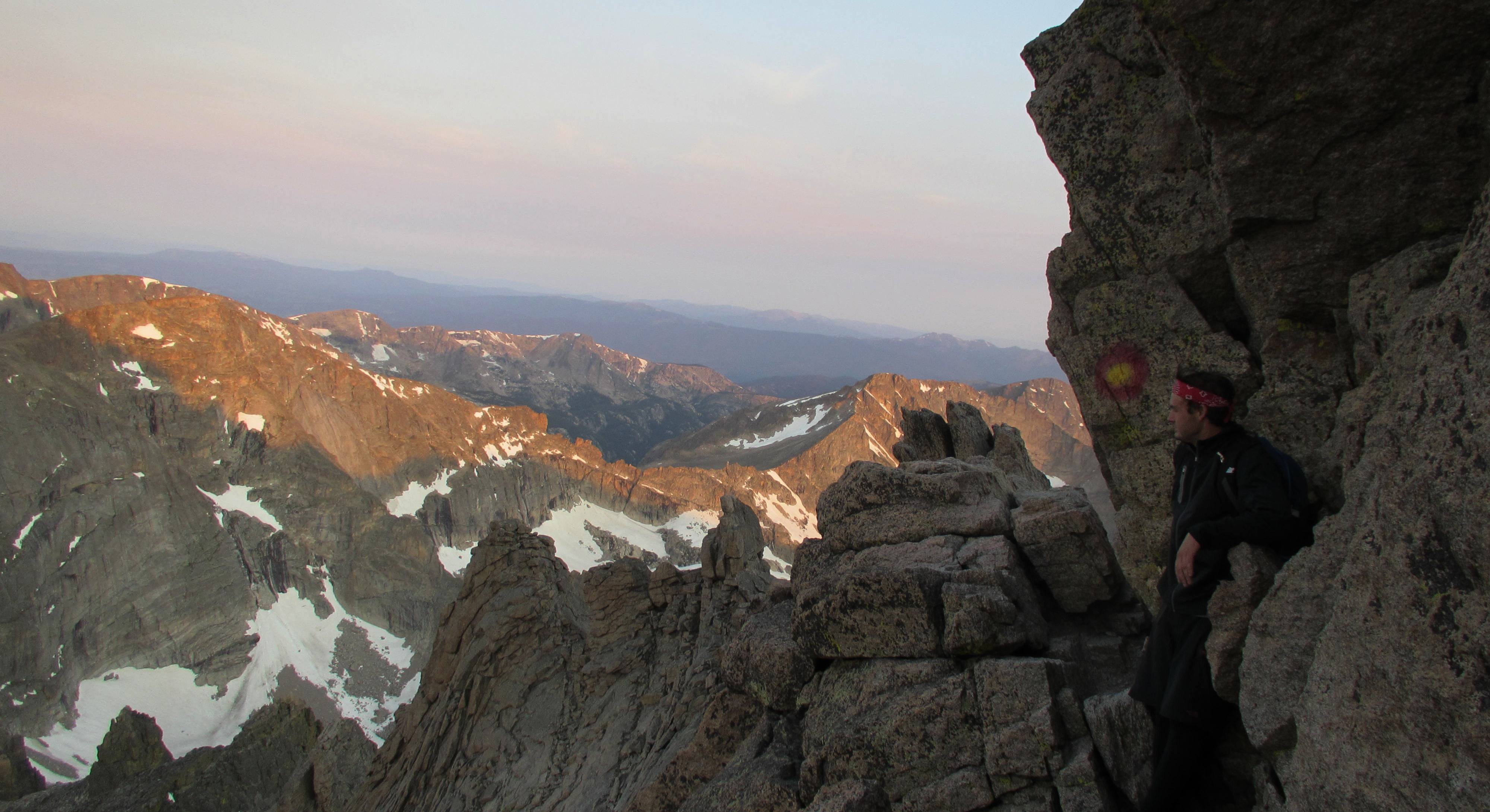 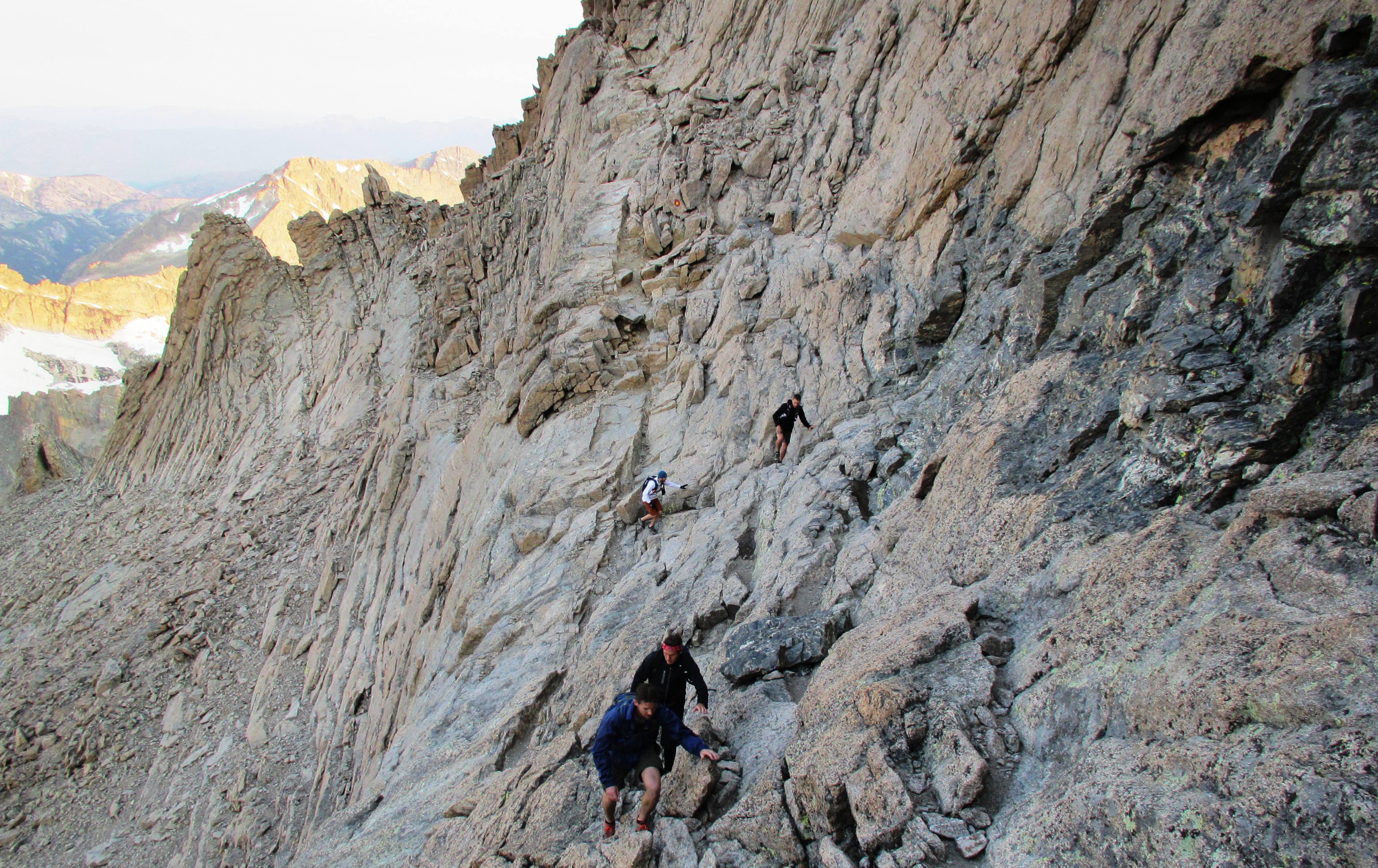 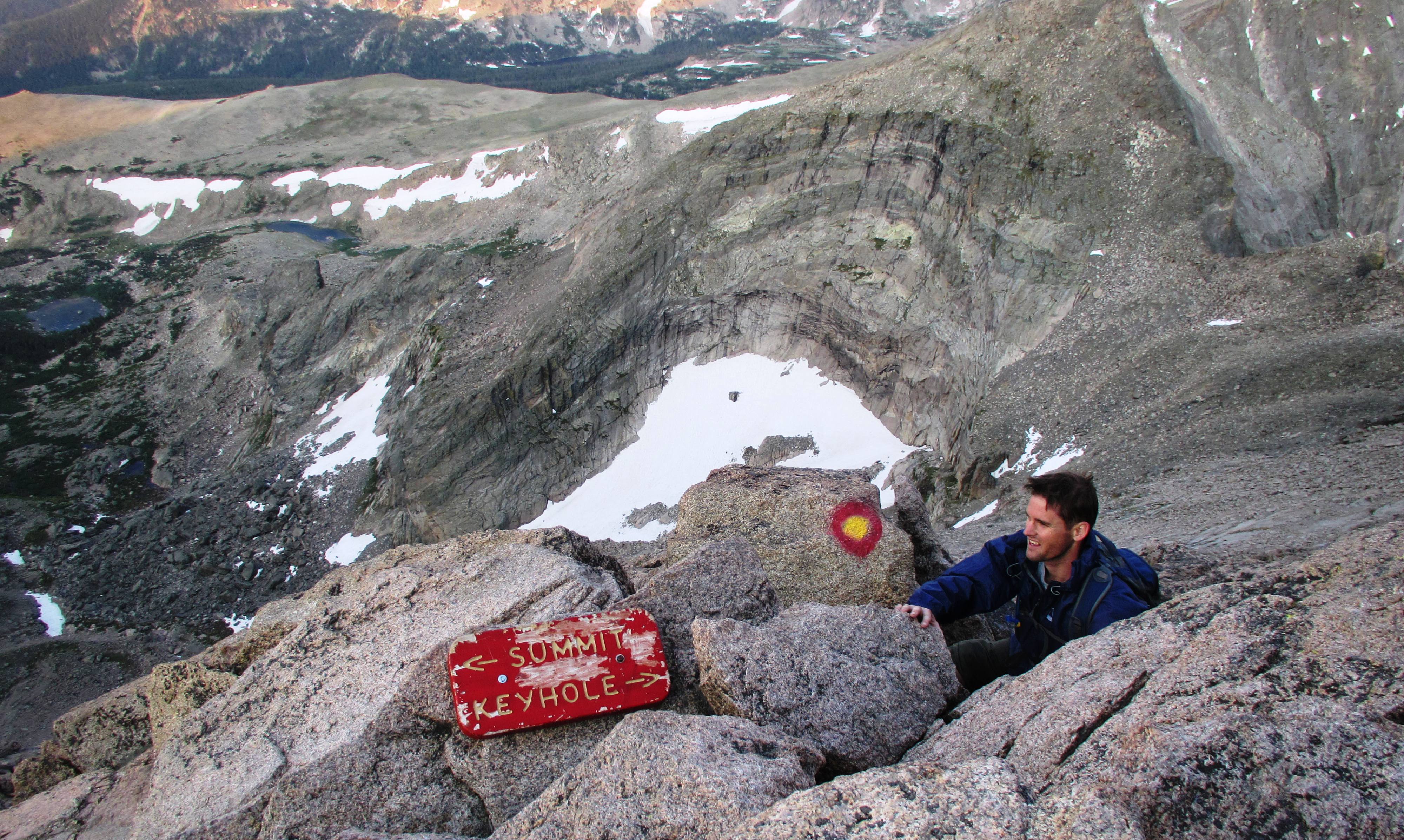 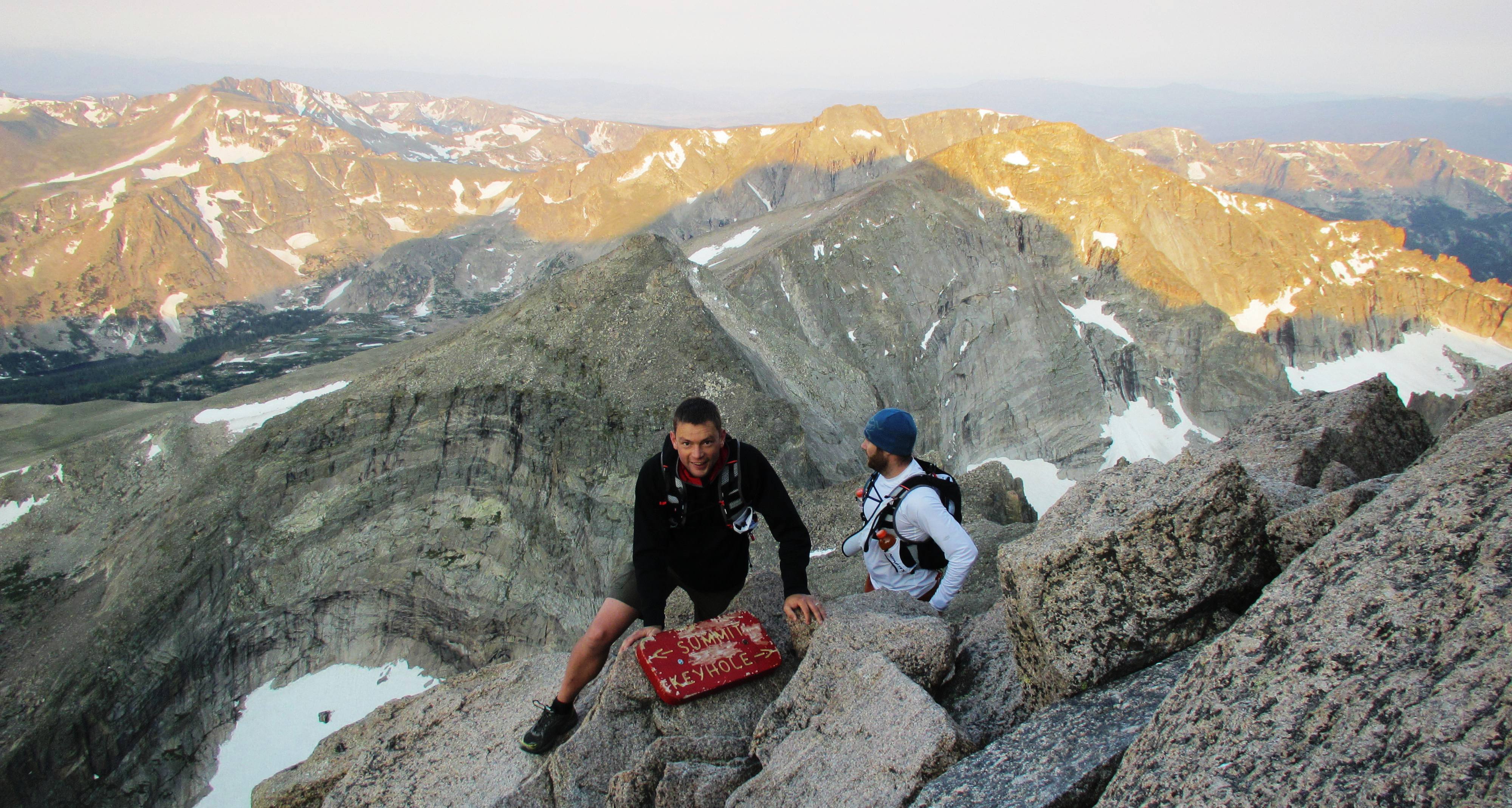 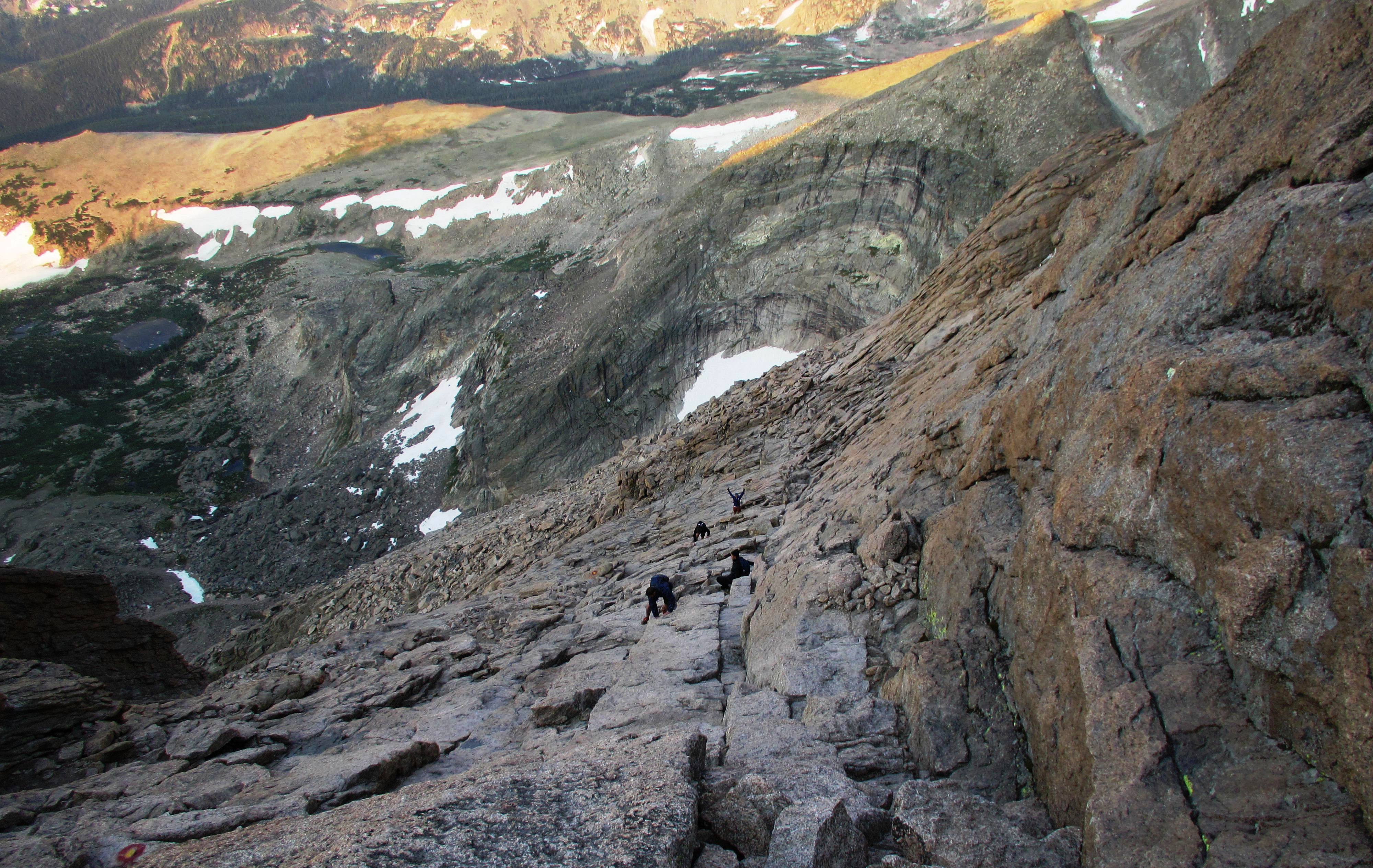 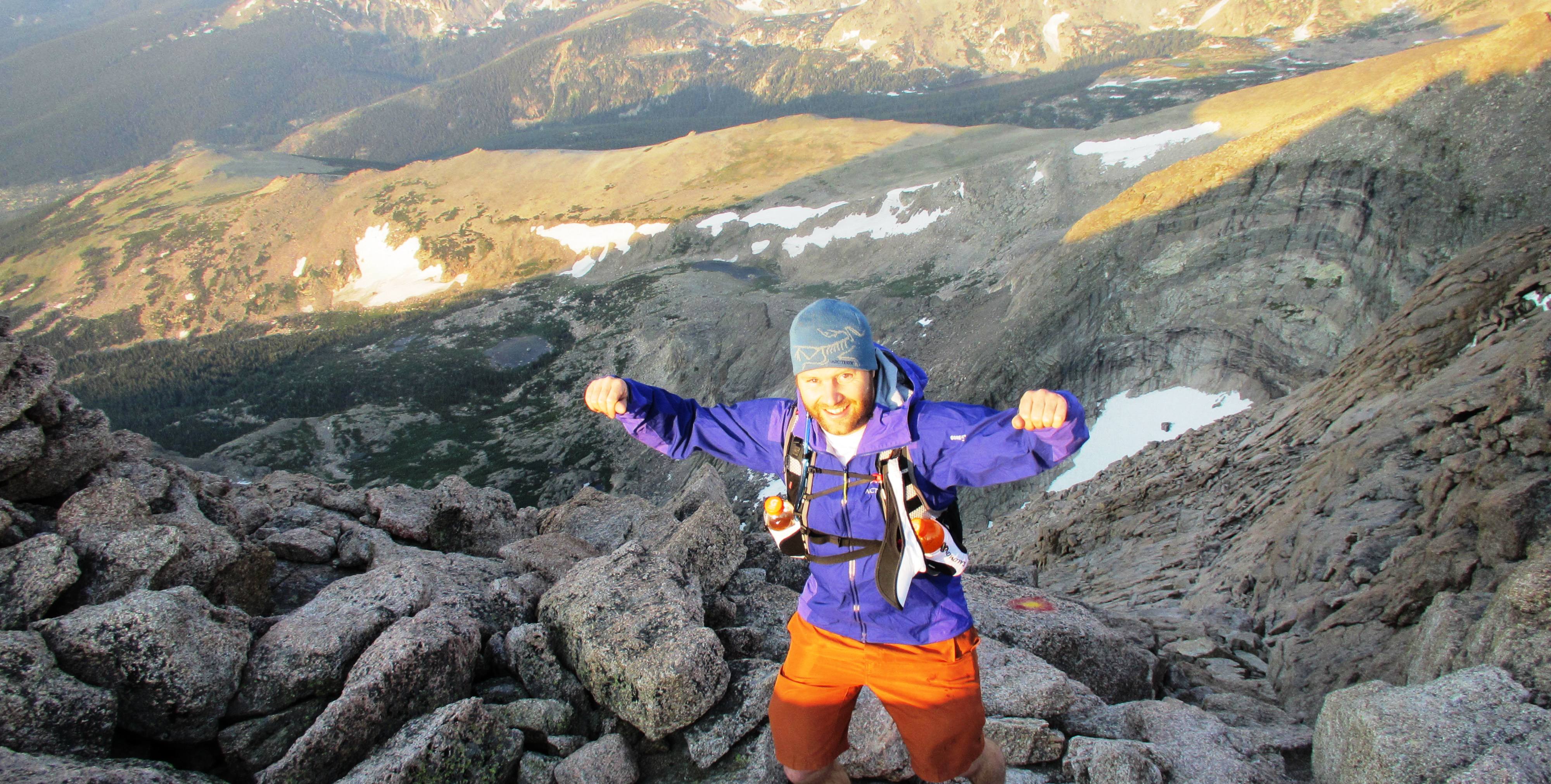 A ten day holiday vacation at sea level left me congested not only with excess oxygen, but excess options. A spring or even summer like forecast, and so many choices for a climb! Yale, Antero, Lindsey, Castle and Conundrum, La Plata, maybe even an attempt at LB’s west ridge??? I spent the majority of the time around New Years debating which peak to attempt over the holiday weekend.

Eventually, Dillon and I settled on La Plata. Neither of us had been up the peak in the past, and it would be his second winter climb while I would no longer be a virgin to the toughest climbing season. With the forecast looking beautiful, I was excited to say the least.

I picked Dillon up at 5:15 AM in Denver and we made our way to the La Plata trailhead. What a treat to drive straight up to a paved, plowed trailhead in winter! We geared up and were on the trail just a few minutes after 8 AM, both of us a bit colder than we had initially anticipated.

The trail starts out down a road before veering left into the woods at a sign. There are a large number of smaller trenches that deviate from the La Plata trail, but if you stay on the most beaten path, and have a sense of where the route goes (very little elevation gain the first half mile), you will end up following the main trench.

(All photos with date and time stamps taken by dillonsarnelli).

Before I lead people astray from what I believe is the proper winter route, I’ll come out and say it.The well-beaten trench that climbs through the woods will deposit you at the lower end of the ridge-line that you’ll use for the summit push. While this was both Dillon and my first time on LaPlata, I am almost positive that you will exit the trees too high / too far left if you follow this trench. (If you look at photo #1 in the route description on the site, the trench exits the trees at lower left).

Upon exiting the trees, the relatively intimidating head-wall at the bottom of the ridge rises in front of you, and tracks spread out and go left, right and straight. Knowing that the winter route deviates a bit from the summer trail, but still goes right of this initial rise in the ridge, we opted to traverse around on frozen scree to try and find an easier path to the ridge.

The traverse wasn’t too bad in the morning as the scree was mostly solid, but it would be much more unpleasant in the afternoon.

Eventually we grew tired of the uneven terrain, and chose to climb a steep yet relatively solid gully for ~250 vertical feet so we could gain the ridge.

Upon gaining the ridge, we met 14er forum members 2aron and JDip, who had stopped to take in the beautiful views. Guys, it was great meeting you both!

Once we gained the ridge, it was a relatively straightforward, “dry scree and talus / occasional knee deep posthole but snowshoes not necessary” grind up to the summit. We reached the top around 12:30pm, about 4 hours 15 minutes after starting.

The views from any 14er are good, but these were particularly stunning. We easily picked out the Elk 14ers, and had fun trying to spot the various San Juans (with the exception of Uncompahgre, which was easy). I don’t think we could see any Sangre 14ers from this point though, just a little too far north in the Sawatch.

As we started the descent down the ridge, we took advantage of the friendly snowfields and plunge-stepped our way down pretty quickly. We discussed the various options for getting off of the ridge proper, and both agreed we didn’t want to descend the steep gully we had ascended. Instead, we opted to look for a dry gully (hopefully less steep than the one we ascended), that would lead us off the west side of the ridge, thereby allowing us to contour around to the trench that would take us into the trees.

In a route-finding mistake that we realized too late, we followed the still visible summer trail off of the ridge and switchbacked our way down toward the drainage on the west side of the peak. We didn’t descend all the way to the drainage though, as Dillon had stashed snowshoes along the main trail in the trees that we needed to retrieve. Instead, once we had lost considerable elevation, we contoured descenders right (north) toward the lower toe of the ridge where the trail had emerged from the trees (photo #3). This put us in an uncomfortable position, as we were forced to alternate between walking sideways on downsloping, now unfrozen scree, and snowfields. The gravity of the situation become more apparent when, upon crossing a crust-covered snowfield, I caused a rather large “whoompf” to occur. The snow didn’t collapse, but there were some small shooting cracks that were generated. Needless to say we high-tailed it back to treeline while avoiding the snow whenever possible. Once back at the treeline we both breathed a large sigh of relief.

We crossed the remaining snowfields very carefully, and stuck to the rocks when possible. The trees and trench grew tantalizingly close and after lots of scree slips and off-balance steps, we reached level ground.

Finally reaching the trees and trench.

Of course, the last 50 yards before the trench provided the most unpleasant postholing (2 inches of concrete over quad-deep powder) that we experienced all day.

Once we hit the trench, we put it in cruise control and quickly descended through the woods to the snowshoe stash. Not having snowshoes, I postholed maybe 8-10 inches a decent amount on the way down, which combined with my already fatigued state from the 10 previous days at sea level made me feel, well, very tired indeed. I imagine Dillon was quite exhausted too, having logged nearly 10,000′ of vertical in 2 days.

If you have any questions on the route or current conditions, feel free to let me know. Thanks for reading!