“There is nothing so American as our national parks. The scenery and the wildlife are native. The fundamental idea behind the parks is native. It is, in brief, that the country belongs to the people, that it is in process of making for the enrichment of the lives of all of us. The parks stand as the outward symbol of the great human principle.” ― Franklin D. Roosevelt

Gerry Roach describes the South Ridge route on Meeker as “one of Colorado’s finest tours” that is seldom done due to its length. He goes on to say that after decades of mountaineering, this mountain remains one of his favorite places.

With that paragraph and a willing climbing partner in Andrew, I already had both feet out the door. We set out from the Copeland Lake TH in Wild Basin at about 4 AM. This would be Andrew’s first trek into Rocky Mountain National Park and I was eager to show him around. The plan: Hike west along the Sandbeach Lake trail to Sandbeach Lake, bushwhack north from the lake to Meeker Meadow, ascend Meeker via its south ridge to the true summit, traverse the knife edge to the lower summit, partially descend Meeker Ridge to treeline, follow Hunter’s Creek back to the trail, and then head back to the Copeland Lake TH.

For the most part, we stuck to the plan. The snowshoes went on at the Hole in the Wall campsite, about a mile and half from the TH. We, however, never made it to the lake. We had been following one set of tracks (tracks that only went in one direction) which abruptly ended about 4 miles from the TH at a rock cropping. Nestled in a tent under a large rock formation we found the human who had created our path. He too was on his way to the lake, but had lost the trail, and decided to call this spot camp. We wished him well and went on our way. From here, we decided to bypass the lake and head northwest in search of Meeker Meadow and treeline. For the rest of the journey, the only tracks to be seen would be our own.

I’m still not very good at walking in my snowshoes, but I’m getting better :). 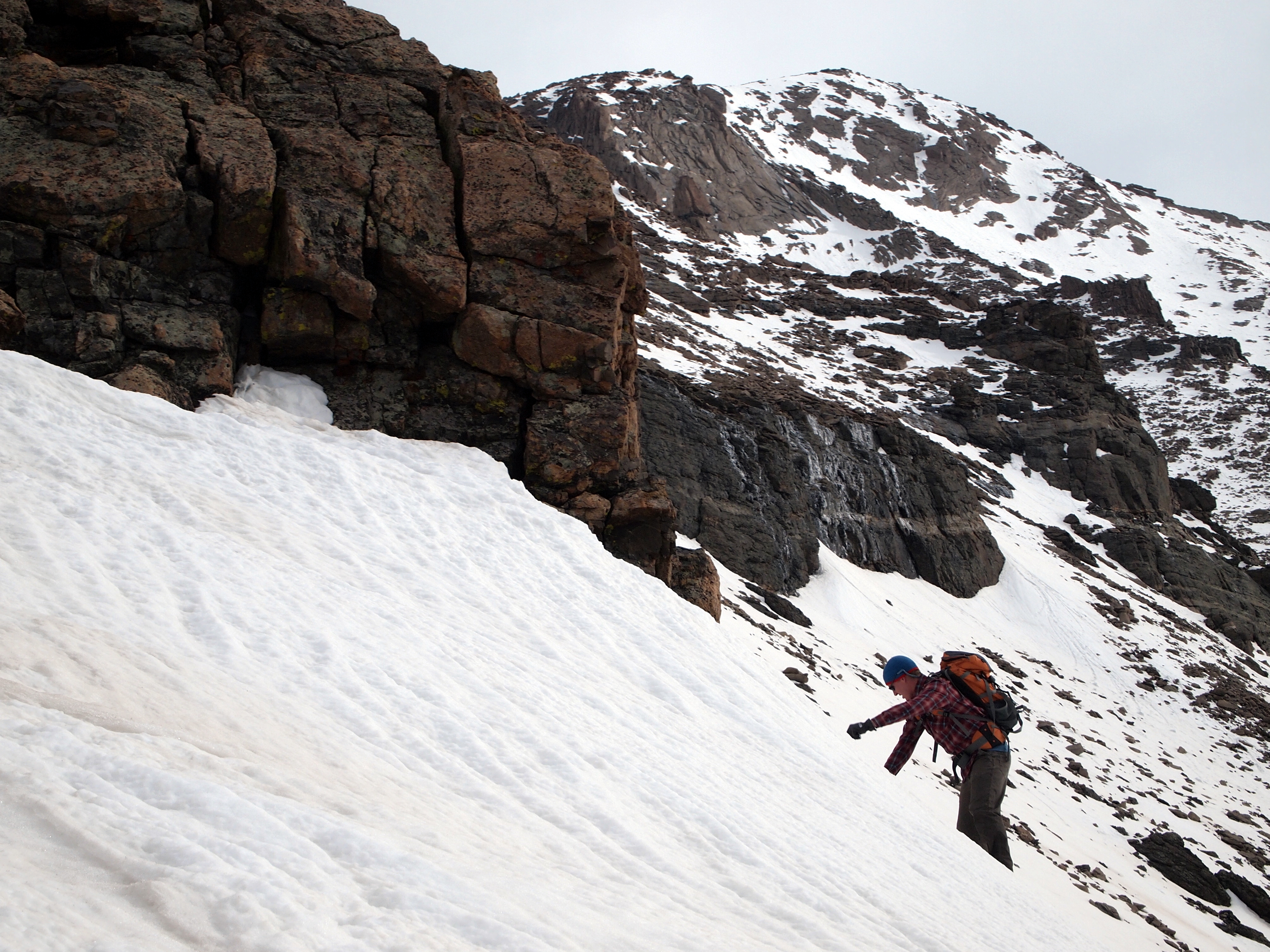 Andrew is that a large gendarme in your way or are you just happy to see me?

We descended Meeker Ridge to a point where the angle relented enough to allow us to head for the trees. Once in the trees, we proceeded southeast back to Hunters Creek, followed the creek back to the main trail, and from the main trail proceeded back to the Copeland Lake TH.

This was a long day with a few lessons learned: 1) Don’t underestimate Meeker. This mountain will give Longs a run for it’s money anyday, 2) going downhill in snowshoes is really hard, and 3) Wild Basin is still one of the best kept secrets in all of Colorado.